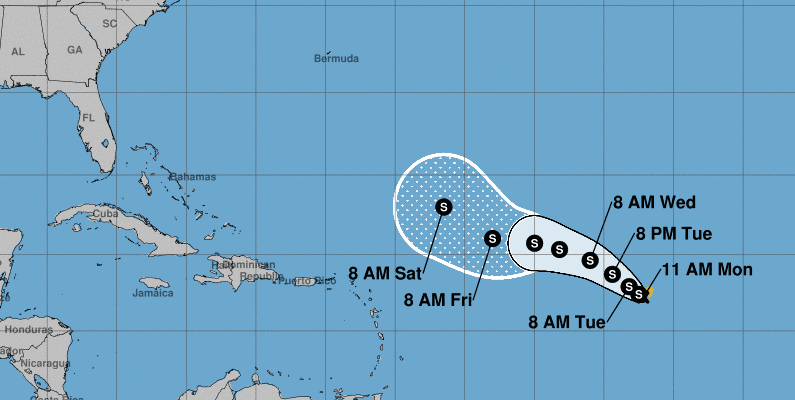 The storm’s maximum sustained winds are near 40 mph with modest strengthening expected over the next few days, the U.S. National Hurricane Center said.

The storm is centered about 1,205 miles west of the Cabo Verde Islands and moving west-northwest near 3 mph.

It’s expected to maintain tropical storm status thru this week as it heads towards Bermuda.

The storm comes amid an active hurricane season but is not currently a threat to land.

There are just five storm names to go before the National Hurricane Center moves to the Greek alphabet for storm names.

A tropical wave located off the coast of west Africa is merging with another disturbance located a couple of hundred miles south of the Cabo Verde Islands, resulting in an extensive area of disorganized showers and thunderstorms. Development of this system is likely to be slow during the next couple of days while it moves west- northwestward at about 15 mph, and a tropical depression is more likely to form early next week over the central tropical Atlantic where environmental conditions are forecast to be more favorable for development.

What is the likelihood of it gaining strength?