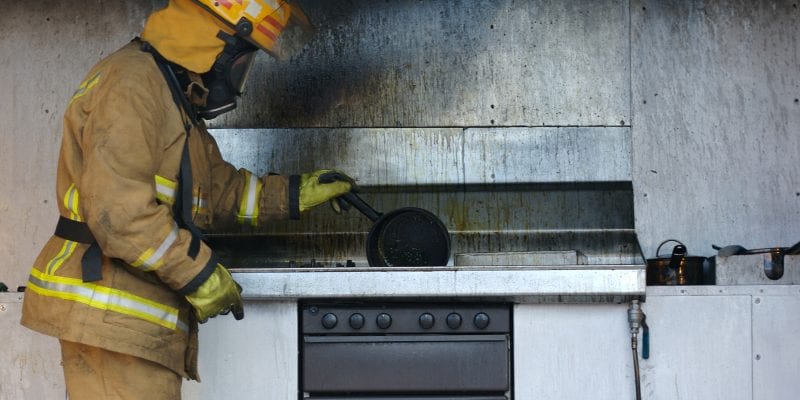 How Harmful is Soot on Appliances, Countertops, Walls, and Other Surfaces After a Fire?

Once a fire has been put out, you may feel that you are in the clear. This isn’t necessarily the case; while extinguishing a fire does indeed remove a clear and present danger to your home and your family, it leaves behind smoke damage, ash, and soot, all of which can cause long term damage on their own.

Soot is residue from burned materials, which includes fuels, wood, and more. In large deposits, such as within a chimney place, it can even re-ignite. The type of soot that you’ll be dealing with will be less concentrated, but no less of a hazard. Inhaling soot can lead to cardiovascular problems in people of any age or level of health.

The type of soot that you’ll be dealing with will differ depending on the materials which caught fire:

• Dry soot, or “dry smoke residues,” which come from fires which burn fast and high. Dry soot is usually powdery, and does not smear. This is the easiest type to remove.
• Wet soot, otherwise known “wet smoke residues.” Wet soot is much harder to remove, and comes from fires which burn slow and low. This type of soot tends to cause the strongest odors, as particles require moisture to transmit smell to our senses. The residue can also be sticky, and will smear on surfaces to cause further discoloration.
• Oily soot, or oily smoke residues.” These come from grease fires, fuel, and burning plastic. Much like wet soot, it is difficult to remove, and smears easily.

The first type, dry soot, can either be removed by a professional fire cleaning service, or by yourself if you happen to have access to a HEPA filter vacuum. Note that conventional vacuums won’t be appropriate for the job; the last thing you’ll want is to reintroduce those particulates into the air.

For wet soot, oily soot, and other types of residue, such as protein residues, which come from burned meat, it’s usually a better idea to speak with a professional fire cleaning service first. The more serious types of soot residue tend to be the most difficult to remove, and the most pungent in their odor. That means a failure to remove them could result in odors which will be trapped in your home for years, or even decades. It may also mean a severe discoloration of your furniture, your walls, your ceiling, and more. Removing soot from the environment as soon as possible will help you to negate this issue entirely.

Also note that removing wet soot, oily soot, and any soot aside from dry soot can actually be dangerous to your health without the proper equipment and training. While dry soot itself can be dangerous on its own, wet soot and oily soot also possess properties that make it easier for those particulates to bind to and damage cells in your skin, eyes, nose, and your lungs. The right call is to get a professional service to handle the job safely.

These soot particles technically called “polycyclic aromatic hydrocarbons” are often microscopic and not visible to the human eye.  They are so small they float in the air you are breathing, especially in a home or building where there has been a fire or smoke event.

Professional IICRC certified contractors (like Regency DRT), trained in smoke and odor removal have the right equipment and know-how to safely rid your property on these contaminants.